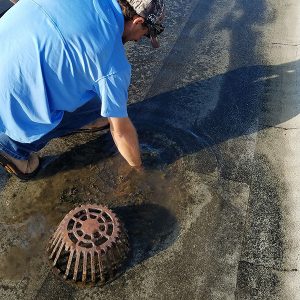 The increase in hourly rainfall amounts that we have seen over the last ten years has the engineering community adjusting their drainage designs that exceed the current plumbing code requirements for roof drainage. As we have discussed in previous newsletters, these adjustments are largely intended to reduce the risk of roof collapse due to loads (in excess of structural design) generated by standing water on roofs.

Beyond roof failure, another side effect of this excessive rainfall is water infiltration around and through roof drain installations. Now I am steering way clear of the political opinions as to why we are experiencing these extreme weather events, but I can tell you that we are now regularly seeing evidence of overwhelmed roof drains on roofs that were installed before the modern code mandated over flow drainage requirements. We define “overwhelmed” as the pipe leader being full and water “backing up” higher than the drain rim. Roofs most severely affected by these new generation of rain events are typically very low slope (1/8”/ft), that have:  drains of 4” diameter or less, parapets, and limited (if any) provisions for overflow; sound like your roof? This “overwhelming” creates a condition where water is covering the roof drain clamping ring (creating head pressure) not merely flowing over it. If the clamping rings are not tight, or if there are materials other than roof membranes and leads (like insulation) between the clamping ring and the roof drain, water will infiltrate under the clamping ring beneath the membranes. At this point damage is much more serious than just blemished interior finishes; damages will include a reduced R value due to wet roof insulation and reduced resistance to wind uplift of adhered systems. Roof systems that are adhered over concrete decks are especially vulnerable since the water has limited opportunity to drain through the deck and can remain trapped between the roof system and the deck indefinitely. 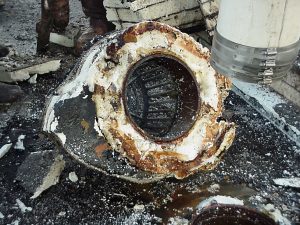 are a significant problem and one of the largest contributors to the premature degradation of roof systems that we here at Zero/Six see over the course of any given year. After hurricane Harvey we saw thousands of squares of roofing damaged by standing water at roof drains during this extreme rain event. Inspections after the storm disclosed roofs that visually appeared fine, but testing procedures (coring and uplift) demonstrated that water existed under the membranes that did not exist prior. This can be a legitimate insurance (or FEMA)  claim (i.e. the roof system has been damaged by a weather event resulting in reduced “r” value and reduced uplift resistance) but the building owner must be able to prove that the roof was not damaged prior to the event; and that can be very difficult to prove (even with proper documentation).

The really scary point is that there are potentially thousands of “loose” roofs out there where the building owner has no idea that they are “loose”. These roofs continue to deteriorate and as they do, resistance to wind uplift is compromised further. A significant wind event such as a hurricane could be overwhelming for the gulf coast roofing community…and the insurance companies…and FEMA. Many of these roofs protect mission critical operations like hospitals where the building damage will seem light compared to equipment damage and lost income.

In the wake of hurricane Harvey, it is imperative that building owners know the condition of their roofs (and building envelopes in general) so that they can plan for either the replacement of the damaged systems prior to a storm or how to recover from catastrophic roof failure. Note that the impact on a region that depends on a mission critical facility (such as a hospital) extends way beyond what insurance can recover.

Bottom line is that roofs (and building envelopes in general) should be inspected yearly and immediately after each significant storm event. If you feel your roof may have been compromised, roof uplift testing is a relatively inexpensive means to determine the extent of any compromised areas. Lastly, understand that roof warranties typically have very limited coverage (if any) with regard to wind uplift and can be voided (or de-rated) if proper maintenance has not been documented.

Although roof drains are part of the roofing system, they are typically part of the plumbing contractor’s scope of work. Specifiers commonly require that the roof drain assemblies be water tested (by the plumbing contractor) by plugging the drain leader with a ball cock and flooding the drain with water. ZSC has seen many roof assemblies ruined by the testing of roof drain assemblies prior to the completion of the roof system (prior to proper termination of membranes at drains). Roof drains should be tested prior to installation of roofing systems.