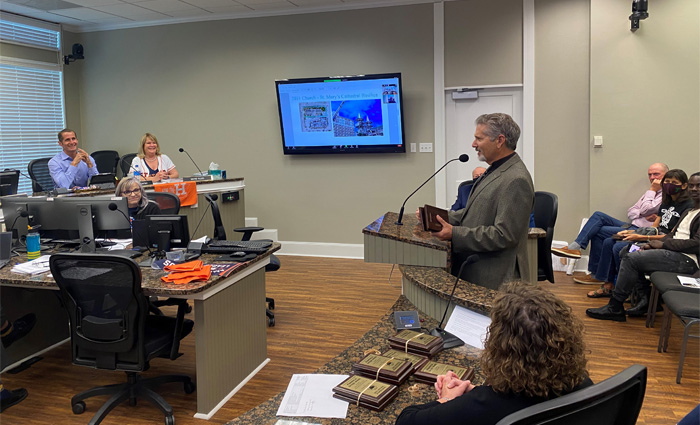 We are proud to announce that the Galveston Planning Commission recently recognized Z6 at its third annual Planning and Design Awards presentation last month for our restoration of St. Mary’s Cathedral Basilica. As the Historic Preservation category winner, the Bill received the award[KK1]  at a presentation at the October 28 City Council meeting. The award was presented to the Diocese of Galveston-Houston, Zero/Six, and Coltzer Company.

Since its inception in 2019, the award was instituted to celebrate projects that contribute to a better quality of life in the Galveston community and serve as models to learn from and emulate. Z6 was selected due to its impact on the community, innovativeness, and ability to serve as a model for other developments.

The church dates to May 4, 1847, when Pope Pius IX established St. Mary’s Cathedral, the mother church of the newly established diocese of Galveston. On August 2, 1979, Pope John Paul II made St. Mary’s a minor basilica to recognize its historical importance. St. Mary’s is commonly referred to as the Mother Church of Texas.

“The Quality of Life Benefit to the preservation of St. Mary’s is immeasurable. Not only has an 1870’s era piece of architecture been preserved in a city rich in historic architecture, a landmark place of worship for Galveston County’s Catholic population has also been secured for years to come.”

“Without a practical manner to tabulate, much less estimate, the comprehensive repair of damaged materials and systems (some of which had not yet been exposed), cost control was as much of a challenge as the technical elements on the project.”

The design-build team created a list of priority tasks and assigned every generic monetary value to them to control the cost. The budget was then adjusted either up or down as tasks were finalized. New tasks (generated by the investigative process) were added to the list of priorities. In the end, the cost control process was able to fund more than $100,000 towards additional scopes of work through “savings.”

Using modern investigative measures, such as laser scanning, the team could graphically reproduce the entire church structure capturing architectural elements that either needed replacing or may need to be replaced in the future (due to storm damage). This included modeling the bell tower using modern engineering software to ensure it could still safely handle the loads created by a 4000 pound cast iron bell.

The quality & comprehensiveness of the restoration process was indeed a “soup to nuts” service that began in 2017 with a detailed assessment report. This report was based on research, observations (by drone and vertical access equipment), laser scanning, and engineering analysis. In short, this report described the condition of the facility, a prioritized list of needed repairs, and a rough order of magnitude estimate of construction cost associated with those repairs.

The report was subsequently used as an architectural program for the construction documents needed to acquire permits and direct/bid the various scopes of work. Construction documents were computer-generated from 3D models acquired from the scanning process. Details were developed as “best guesses” for pricing exercises and later revised alongside construction personnel once the complete condition had been exposed.

Construction was delivered in an old school manner with Coltzer Company self-performing many civil trades such as demolition, concrete, structural steel, and carpentry. “As-Built” documentation for the process were stored as a live document accessible by the team through the Zero/Six website and are updated by the team as maintenance occurs. The quality of the process has always been the focus, be it the design phase, the construction phase, or as we now operate in the maintenance phase.

Keeping costs in line with the project’s value

In a world where project cost is typically defined as “what the market will bear,” as opposed to what the project is “worth” (i.e., cost plus a fee), the St. Mary’s project represented fair market value for high-quality work.

“Our processes refute the argument that restoration work is too costly and will hopefully motivate others to restore, not merely renovate but raze.”

The education and engagement of the community in our project was constant; that said, sometimes it was planned, and sometimes it was not. Planned activities included tours of college architecture students from around the state. The not-so-planned activities included crowds of people that would appear (and cheer) street side on “big lift” days, such as the return of Stella Maris to her pedestal atop the bell tower.

The restoration of St. Mary’s was a once-in-a-lifetime experience for our teams, and we appreciate the opportunity to tell part of the story.