The Rosenberg House was built in 1859 in Galveston, Texas by philanthropist and business leader, Henry Rosenberg. The graceful Italianate style combined innovative design and understated elegance for the time. After the death of Henry and his wife, the house fell into neglect before being purchased by the Sealy & Smith Foundation and donated to the University of Texas Medical Branch (UTMB) in 1989. Following an extensive restoration, the home has received much needed renovations to bring back its original charm and beauty.

The UTMB Galveston staff observed increasing signs of moisture in various areas of the home and mildew on pocket doors. Our sister company, W.H. Coltzer (WHCI) performed a forensic investigation to determine the moisture and mildew’s cause and suggest options for remediation.

WHCI conducted a comprehensive investigation of the exterior and interior of the home. Here is what they found. 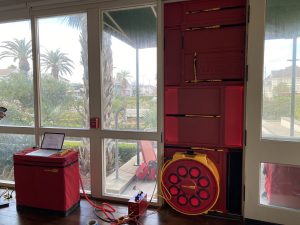 WHCI performed air infiltration testing with the blower door method throughout the entire home to determine the amount and cause of air leakage. Blower door testing uses fans to gauge the amount of air pulled out of a structure to evaluate the level of airtightness.

The test revealed a large number of leaks within the building envelope. If the air leaks were combined into one visual opening, it would be 1 inch tall by 42.52 feet long or 3.545 square feet. To determine where the air was entering the home, WHCI combined heatless smoke with the blower door test to pinpoint air leak locations in the home. Here are the results:

WHCI found that overall, the exterior envelope was in relatively good condition considering the age of the structure. The crawlspace proved to be the weakest link in the building envelope and the biggest culprit for creating moisture issues within the house. The attic space and mechanical room also contribute to air and moisture in the home.

The highly trained team of professionals at WHCI provided UTMB with an exhaustive report detailing their complete observations, tests, and recommendations.