Unfortunately, these requirements were relaxed in the most recent building code for existing buildings. In the International Building Code (IBC) and the International Existing Building Code (IEBC) 2015, there is an exception for re-roofs which changes the requirement to “positive roof drainage” rather than the one-quarter inch per foot minimum slope. The issue with this change is positive roof drainage is defined as “the drainage condition in which consideration has been made for all loading deflections of the roof deck, and additional slope has been provided to ensure drainage of roof within 48 hours of precipitation.” There are a few problems with this type of imprecise requirement; even if the roof meets this definition, it could still be prone to ponding instability without adequate slope to the drains and overflow. 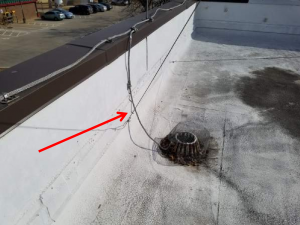 The new code requirements have also relaxed the prerequisite for overflow drainage to be added to existing buildings. There is an exception in the IBC 2015 (but not the IEBC 2015) for re-roofing that says recovers or re-roofs on existing buildings aren’t required to meet the requirement for overflow drains. This is exactly the recipe for catastrophic disaster as it is assuming roof performance will continue as constructed, with or without overflow design. This can be dangerous as it only takes one primary drain to become blocked with debris, without any overflow, to create roof ponding instability
due to excessive rain loads. For example, without the primary drain functioning during a rain event; it’s possible for 12” of water depth to accumulate in a roof area. Twelve inches of standing water translates
into 62.4 psf of load. The roof members may have been designed to resist excessive deflection and stress at a 20 psf total live load. This additional load of 3 times more than what the roof members were designed to hold can lead to runaway deflection (deflection causing more ponding depth and rain load) and catastrophic failure.

For new construction, the IBC and IPC 2015 handles roof slope, drain leader and conductor sizing, and overflow requirements adequately, but remains vague on rain load calculations found in Section 1611. The roof slope is generally required to be a minimum of one-quarter inch per foot as previously defined. The drain leader and conductor sizing is handled in IPC Section 1106, where tables can be found that provide the maximum flow that can be handled by various sized pipe and gutters. Overflow requirements are discussed in Section 1503.4 of the IBC 2015, where the secondary drains or scuppers are required to comply with IPC Sections 1106 and 1108. These sections all require the secondary roof drainage be designed to prevent the depth of ponding water from exceeding that for which the roof was designed for in the event primary drains allow buildup for any reason.

Rain loads are handled in the ASCE 7-16 Minimum Design Loads for Buildings, chapter 8 and C8. Rain 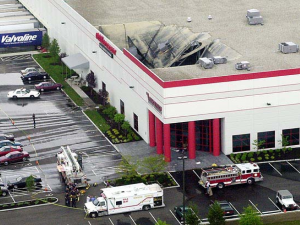 loads are calculated using a process which begins with the rainfall intensity, defined as i. An important difference from the IPC 2015 is commentary in ASCE 7-16 Chapter C8, where it suggests using the 15-minute duration/100-year instead of the 1-hour duration storm for roof overflow drain design. This is due to the fact that the 15-minute duration, when converted to inches per hour for i, equates to nearly
double the intensity (For Galveston, i = 4.6 inches/hour for 1-hour duration, and i = 8.0 inches/hour for 15-min duration). Anyone familiar with the heavy, short duration storms that frequently occur along the gulf coast in South East Texas can understand why it makes sense to use this higher rainfall rate that can occur within a shorter amount of time.

The next step is to take the tributary area of the overflow drain being analyzed and multiply it by this rainfall intensity with the appropriate empirical factor in Equation C8.3-1, Q = 0.0104Ai. With the flow rate needed to drain this area, the tables in this C8.3 chapter are then used to calculate the hydraulic head for any type of overflow scuppers or drains.

Finally, using the calculated static head, dh (the depth above the primary drain to the overflow) and Equation 8.3-1, R = 5.2(ds+dh) the design rain load, R is established, This design rain load R can
be combined with other loads to properly design the structural members.

In Europe, studies have been carried out that reveals that ponding instability is an issue there as well. In the Netherlands, about 20 flat roofs collapse every year from heavy rain showers causing
ponding on roofs. The government there has taken action, with a supplement to the NEN 6702 building code (NPR 6703) to simplify the calculations and make a ponding assessment on flat roofs. Consulting engineering firms were engaged and all municipal buildings open to the public were assessed. The roofs were inspected and the relevant characteristics were reported on, then if necessary calculations were performed to ensure the roof meets the requirements to properly drain rainwater. For flat roofs assessed, 130 of the 231 roofs didn’t comply and had emergency overflow
drains placed to prevent ponding.

Providing a systematic study of existing buildings is a great idea to rapidly assess multiple flat roofs and provide an assessment of ponding instability. Since it is a life safety issue as well as a huge cost when a roof collapses due to ponding instability, this method could be employed on a state-wide level in America beginning with public buildings as well.

The code commentary in IBC 2015 continues to give valuable information on ponding instability in C8.4, which includes references to many other standards and studies for additional
direction on rain load analysis. A great resource is the Structural Joist Institute (SJI) Technical
Digest 3, updated in February of 2018. This document summarizes all the different code previsions for ponding and assists with roof design for joist to properly handle the rain loads. SJI has created an
in-depth Excel file which can be used to double check calculations for the roof joists as well.
Our hats are off to Dr. Patterson, Dr. Mehta and others who understand and educate others on the vital importance of proper design in regard to roof drainage. Though catastrophic roof failures are rare, the associated consequences on your building or a building you may occupy should force this topic to the forefront of any acceptable building design.